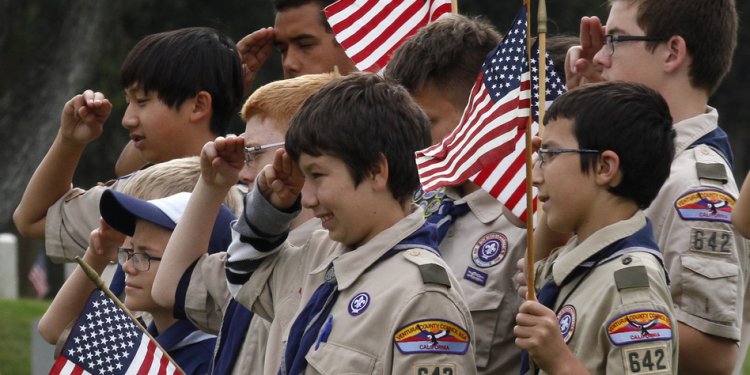 Who Started Boy Scouts of California?

This brief history was researched and written by Scoutmaster Jeff Snowden in 1984, and has been continually updated since. It is based on considerable research (see reference list at the end) and personal experience. The history is intended to be accurate and factual, but of course will contain some personal interpretations of events. Corrections of fact are always welcome.

Scouting began in England in 1907-08, created by General Robert Baden-Powell. B-P, a 50-year old bachelor at the time, was one of the few heroes to come out of Britain's South African ('Boer') War. He was known primarily for his unusual ideas about military scouting, explained in his book Aids to Scouting. Startled to discover that many boys were using his military book as a guide to outdoor activities, he began to think how he could convert his concepts of army scouting for men to "peace scouting" for boys. Gathering ideas from many sources (including Ernest Thompson Seton, who had founded a boys organization in the US), he tested his program on a group of boys on Brownsea Island in 1907. The island camp was successful, so B-P rewrote his military book, calling it Scouting for Boys. The climate was right for a youth program like Scouting, and it spread quickly around the British commonwealth, then to other countries.

Today, Scouting is found in 190 of the world's 195 independent countries. The United States has a single national Scouting organization (many countries, especially in Europe, have several separate Scout organizations, divided by religion or language, with different uniforms, advancement, and national hierarchies). Scouting is the world's most successful youth movement. [More information on international Scouting can be found on our World Scouting page.]

William Boyce. The Boy Scouts of America (BSA) was founded by Chicago publisher William Boyce on February 8, 1910. At that time in the US, there were several other loosely structured outdoor-oriented youth organizations, some using the name "Boy Scout" and some using other names, and there were already a number of troops in existence using some variation of the British Scout program. Boyce's key contribution was to organize the BSA as a business. He incorporated the organization (in Washington, DC, rather than Chicago), recruited key youth professionals (in particular from the YMCA) to design and operate the program, and he provided key funding for the infant organization.

YMCA— To a great extent, the YMCA operated the BSA during its first year, particularly YMCA executive Edgar Robinson, who first suggested to Boyce that the YMCA was well positioned to provide structure and leadership to his fledgling Boy Scouts of America. Robinson set up the first BSA office next to his in Manhattan, and recruited YMCA official John Alexander to be the BSA's first 'managing secretary'.

Early Actions. The new BSA quickly established a national office, developed a temporary handbook, sought out Baden-Powell's endorsement (which they got), and continued the effort begun by Boyce to get a Congressional Charter from the US Congress (which they got in 1916). They also began an active campaign to absorb all other Scout-type youth organizations into the BSA, often simply inviting rival leaders to be members of the new BSA National Council. Indeed, only one such organization held out past 1912—publisher William Randolph Hearst's militaristic 'US Boy Scout' (also called the 'American Boy Scout') organization (founded only three months after the BSA, in May, 1910, and later a member of the Order of World Scouts, a mostly British program in competition with Baden-Powell's program). Resorting to the federal courts, and aided by their Congressional Charter and testimony from Baden-Powell, the BSA obtained a favorable ruling against the "US Boy Scout" in 1919.