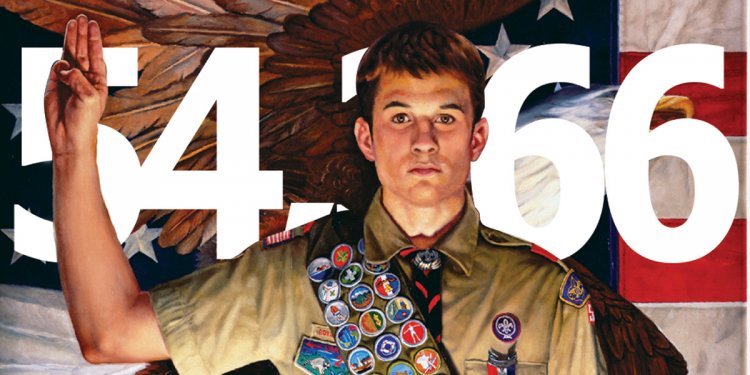 With the wave of a sign at a busy Bethesda intersection Thursday, Pascal Tessier joined about a dozen classmates in a demonstration against an organization he says he loves but knows doesn’t fully accept him and could, at any moment, throw him out.

Tessier, a junior at Bethesda-Chevy Chase High School, is a poet, an electric guitar player and an ice cream lover. He is also a Boy Scout and openly gay, which puts him at risk of being denied the Eagle Scout ranking he has long pursued.

“The best word would be devastated, ” Tessier said of how he’d feel if that were to happen. “I’d also feel betrayed, because it’s an organization I trusted, and I put my heart into doing good for them.”

A coalition of 42 conservative groups, including the Southern Baptist Ethics and Religious Liberty Commission and the Family Research Council, bought an ad in USA Today urging the Boy Scouts to keep its membership standards. “How will parents be able to entrust their children to the Boy Scouts if they trade the well-being of the boys for corporate dollars?” the groups asked.

A family photo of Pascal Tessier, left, and Lucien Tessier, right. Both brothers are still involved with the scouts and are openly gay. (Courtesy Photo)

Petitions posted on Change.org by Zach Wahls, founder of Scouts for Equality, urge executives at AT&T, Intel, Verizon and UPS to withhold donations if the scouts don’t lift the ban. They’ve been signed by thousands of people.

But among the voices, few have as much to lose than a 16-year-old with braces who sat cross-legged on the couch in his Kensington home one recent afternoon.

Last year, a gay Scout in California, Ryan Andresen, was denied Eagle Scout status, the group’s highest ranking, even after completing all the requirements. And in Ohio, den mother Jennifer Tyrrell was forced to step down by her troop because of her sexuality.

Thursday’s demonstration, which was organized by students who belong to B-CC’s Gay Straight Alliance, took place at Wisconsin Avenue and East-West Highway, within walkable distance of the high school. It was also, not by accident, a mile and a half from the headquarters of the National Capital Area Council, which oversees 687 troops between Frederick and Fredericksburg and which will send delegates to vote in Texas in May.

Aaron Chusid, a spokesman for council, said Tessier has reason to worry about his status. “Under the current policy, if he is out about being gay, he is not eligible for being a member, which would make it impossible for him to complete his Eagle, ” Chusid said.

At the same time, Chusid praised the teen for displaying the lessons that are taught in Scouting. “It’s easy to talk about being brave when it doesn’t cost you anything, ” he said.

Tessier uses two words to capture his experience with the Scouts: “Life shaping.”

“I definitely wouldn’t be the person I am today without the Boy Scouts, which sounds cheesy, but it’s true, ” he said. “It’s a big part of my life, and I love it. I love the camping. I love the people. I especially love the lessons I’ve learned, life lessons and survival ones.”