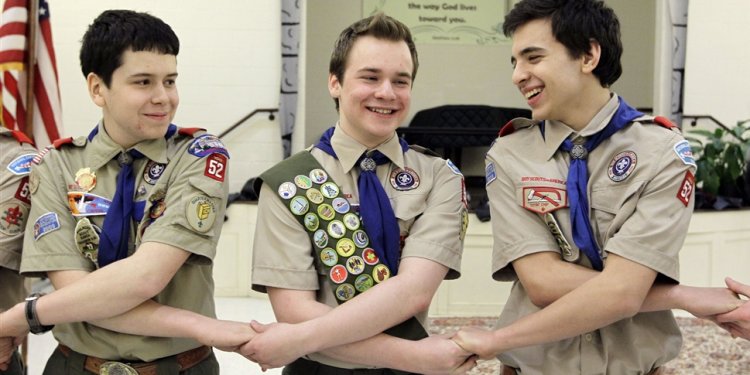 In March of 1946 the Boy Scouts of America announced the first six square knot awards. These awards were to replace the ribbon bars that were being earned at the time. The list of knots has continued to grow. Some knots have been discontinued and others have been added. At present there are 34 knot awards. These awards are worn on the Scouting uniform in place of the plaque or large pendant that they represent.

Generally, the knot awards are worn by adult leaders. But there are a few that may be worn by youth members. Cub Scouts and Boy Scouts may wear the Universal Religious Emblem and the lifesaving and Meritorious Award knots. Explorers may display on their uniforms the same honors plus the Explorer Achievement Award knot.

Knots are sewn centered above the top seam of the left uniform shirt pocket, in rows of three. There is no order for wearing the knot awards. However, there is a proper way for each knot award to be displayed. The loop of the embroidered square knot that comes in front of the standing part is always to the wearer's right. Knots are worn with the distinguishing color (not white) toward the wearer's right.

Some knots are the same for training or service in different programs. For example, the Scouters Training Award knot is the same for service in Boy Scouting, Varsity Scouting and Exploring, Commissioner Service and District Committee. To distinguish the difference in programs a small device may be worn inside the knot for the appropriate program. If the knot award is earned in more than one program then more than one device should be worn.

RELIGIOUS EMBLEMS
(youth) - This knot is worn by any youth that has completed the requirements listed by their religion in literature related to the specific emblem. There are 47 emblems that may be earned from different religions.

(adult) - Adult that complete specific requirements of their faith may earn this award. At present 15 religions offer leader opportunities to earn religious emblems.

LIFESAVING AND MERITORIOUS ACTION
- The highest honor that can be bestowed to an individual. Awarded to youth or adults who have demonstrated both unusual heroism and skill while saving life or attempting to save a life at extreme risk to self. The knot is the same as the Honor Medal but the medallion has crossed palms.

- Awarded to youth or adults who have demonstrated unusual heroism and skill in saving a life or attempting to save a life at considerable risk to self. The recommendation form is the same for all four awards.

- Awarded to youth or adults who have demonstrated heroism and skill in saving or attempting to save a life with minimum risk to self.

- Earned by a youth or adult by performing an outstanding act of service and exceptional character by putting into practice scouting skills and ideals. It does not need to involve risk to self.

ACHIEVEMENT AWARDS
- Adults who earned their Arrow of Light award as a Webelo Scout may wear this knot. The requirements are listed the Webelos Scout Book. Supply No. 33108

- Scouting's highest rank is earned by Boy Scouts who fulfill requirements stated in current literature. Adults wear the knot award No. 05011, youth wear the badge No. 00489. Those who receive the Distinguished Eagle Award may wear that device attached to this knot. On formal occasions the eagle pendant may be worn by either youth or adults.

- Originally this award was presented on the basis of one per BSA area. Now it may be earned by those completing requirements on form No.58-413. The knot is No.5007.

- This award is earned by leaders serving in Boy Scouting, Varsity Scouting, Exploring, Commissioner Service and District committee positions. The criteria involves the proper training, tenure, and performance. If someone fulfills the requirements for this knot in more than one program area they may...