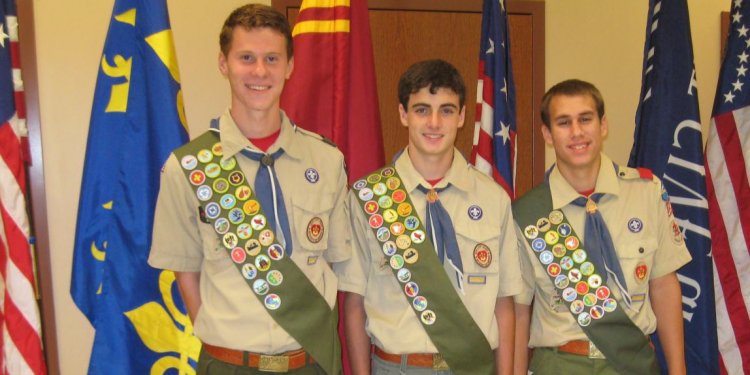 Try these readers’ tips to make your troop’s next eagle scout court of honor memorable.

Don’t stifle creativity
As the father of two Eagle Scouts (and soon three), I have been involved in planning and performing Eagle ceremonies. Here is some of what I have learned.

The ceremony should be what the Eagle wants, followed by what his parents want, and then what the troop can do to support the Eagle and parents. Never let imagination be overruled by troop traditions or “ceremony by committee.” There is no right or wrong (or official) ceremony. — Assistant Scoutmaster C.H.; Whittier, Calif.

Inspire the next generation of Eagles
During my oldest son’s Eagle ceremony, he called up his younger brother as well as my husband and me. After receiving his Eagle neckerchief and presenting our parents’ pins, Kyle gave his troop neckerchief and pewter pin of a flying Eagle to his brother with the charge that he, too, become an Eagle Scout. — Webelos Den Leader T.M.; Snohomish, Wash.

Display your memories
For each of my sons’ Eagle ceremonies, I put together a three-minute photo slideshow beginning with their first pinewood derby cars, following with their adventures in Webelos Scouting, into Boy Scouting, summer camp, their entry into the Order of the Arrow and their Eagle Scout service projects. As background music, I used the movie soundtrack from the movie “Last of the Mohicans.”

Honor troop traditions
Troop 102 has produced 69 Eagle Scouts in its 30 years and has established a number of traditions for successful Eagle Scout courts of honor. Here are a few.

Put the Scout in charge
When a Scout in our troop completes the requirements for Eagle, he is totally in charge of what, where, and how the ceremony occurs.

We have had Eagle ceremonies at camp-outs, troop retreats, quarterly courts of honor, even at a boy’s home. Every ceremony has been unique and exciting to watch develop, and it is even more exciting to see the leadership that each new Eagle Scout gives to its preparation. His parents are encouraged to support the Scout or to limit him as they see fit, but to allow him to develop the ceremony. — Troop Committee Chairman E.H.; Chesterfield, Mo.

A true court of honor
In 40 years as a professional Scouter in six local councils, I have attended more than 500 Eagle courts of honor. One stands out.

The site was a real court, with a real judge in his robe. The bailiff wore a Scouter’s uniform. The prosecutor and defense attorney were Scouters who conferred in advance to plan questions and answers. The jury was 12 leading citizens and officials of the chartered organization.

Presentation of the case took less than an hour and covered such questions as: Why should this Life Scout become an Eagle? What does Scouting mean to the boy? What’s the value of a Good Turn? What does “Be Prepared” mean?

The judge read the jury’s verdict and declared the boy worthy to be an Eagle Scout. He then complimented the Scout, his parents, troop leaders, and all who touched his life on the trail to Eagle. The judge called the parents and boy to the bench and presented the Eagle badge. — Retired Scout Executive J.W.A.; San Diego, Calif.

Honor other top awards
Our troop’s Eagle court of honor master of ceremonies asks those who have earned the top awards in Scouting to stand, tell their name, and when and where they earned their award. Those invited to stand and be recognized are Eagle Scouts, King and Queen’s Scouts (we have a dad who is a Queen’s Scout), and Gold Award earners from the Girl Scouts. This is very impressive as part of the ceremony. —Troop Committee Member D.D.; Houston, Texas

Find ways to include younger Scouts
Our troop includes a part of the program designed to involve younger Scouts. Using a simple candle-lighting ceremony, a Scout recites the 12 points of the Scout Law. A voice from a hidden microphone reads the explanation for each point, but not from the current Boy Scout Handbook. I copied a few lines from the 1965 edition of the handbook. The “old style” language of the interpretation gives a fresh insight into the Scout Law that has both Scouts in the troop and graying heads nodding in agreement.

We use a similar idea to highlight the ranks leading up to Eagle, using a Scout of each rank to represent that rank. The involvement of the younger Scouts gives them a part in honoring the new Eagle and encourages them to advance to the top rank. — Scoutmaster E.W.; Sibley, Mo.

Speak from memory
Our troop believes the best Eagle Scout ceremony occurs when leaders, members of troop, and parents have a part in honoring the new Eagle. We have found it best for the speaker to memorize our Eagle court of honor script. This gives dignity and animation to the ceremony and holds the audience spellbound. No one blinks, except for tears.

The nice part about speaking from memory is that the speaker can add or subtract to his heart’s content as long as he covers the memorized parts. Also, the program can be broken into parts so that speakers are responsible for only short sections. — Scoutmaster M.D.K.; Brownstown, Ind.

A token of congratulations
Our last Eagle ceremony ended with to give the new Eagle Scout as a keepsake. It makes a wonderful memento of the occasion. — Troop Committee Secretary J.A.; Middlefield, Conn.

A special neckerchief slide
I always made a one-of-a-kind slide for each of my Eagles. Each boy had exhibited some unique character trait or talent, or had gone through some experience that could be illustrated in the design of a neckerchief slide.

Presentation of the slide became part of the ceremony, giving me the opportunity to give special praise to the new Eagle. He would also have a memento to remind him to preserve the trait or talent that earned him the slide. — Scoutmaster R.P.; Murphy, Texas

A chieftan’s pole
For earning his Eagle badge, my son Chris was given a unique gift: a beaver-chewed birch log that had been decorated and carved to resemble a chieftan’s pole. This type of pole is used in some Native American cultures to recognize the person whose turn it is to speak. Chris suggested that we use it for his Eagle court of honor.

An Order of the Arrow member wearing full Indian costume was master of ceremonies. We adapted the traditional Trail to Eagle ceremony to center around an Indian youth who grows to become a full-fledged warrior. When guests came forward to make presentations, they were given the chieftan’s pole in turn. Finally, the pole was given to Chris for his response, a perfect end for the court of honor. — Troop Advancement Chairman G.R.K.; Orange, Calif.