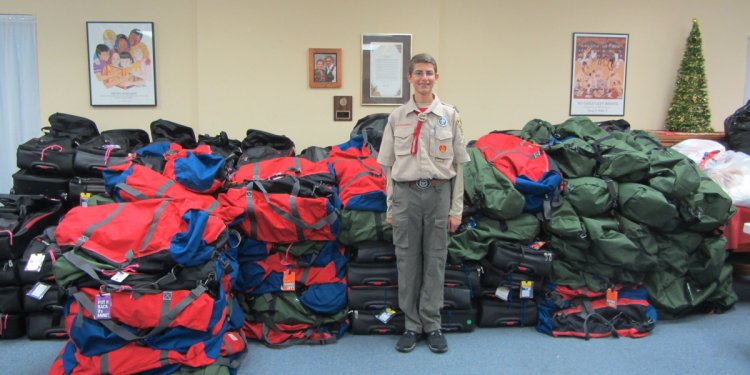 Joseph and his family have a special connection with Sinkyone. Though they live six hours away, the family has visited the park every spring for over a decade. Joseph’s father, Ken, was introduced to Sinkyone by a friend who found comfort there after losing a brother. Ken recognizes that there is something profound about the park:

“It’s amazing how spiritual that place is. People go out there and never forget it. There’s something about it that is just a little bit different from any other state park I have been in.”

Joseph and his sister Amanda have grown up exploring and playing in the scenic splendor of Sinkyone Wilderness State Park. They forged a bond with nature there, and are both now active in the Scouts.

When Joseph decided to pursue Eagle Scout status by completing a service project, he knew he wanted to help out at Sinkyone.

The service project is one of many rigorous requirements for a Boy Scout to earn Eagle Rank — the ultimate scouting achievement. The scout manages the project from start to finish, gaining administrative approval, raising funds, and coordinating volunteers. Joseph asked Park Ranger Josh Ertl what he could do for Sinkyone, and when Ertl mentioned replacing bridges, Joseph knew that that was the project for him.

This was an extremely ambitious project for a Scout to take on, and Joseph had plenty of challenges — but with the help of Camp Host Carla Thomas and Ken, an engineer, he overcame them. Joseph received California State Parks’ approval to replace four bridges on the trail from Needle Rock to Jones Beach. With Carla’s assistance, he secured the $8, 000 for materials from California State Parks. The crowning accomplishment was assembling a phenomenal team of volunteers: members of the Whale Gulch Volunteer Fire Department and Southern Humboldt Technical Rescue Team, California State Parks staff and volunteers, Boy Scouts from Newcastle Troop 13 and the Haas family all gave their time and energy to the project.

Together the team contributed more than 1, 500 volunteer hours. They carried three and a half tons of lumber – by hand – down the winding trail to the building sites, where they meticulously constructed the bridges.

Joseph, who wants to be an engineer someday, says the project was even harder than he had expected, but that it was worth it. He learned that success “came down to how you communicated and how we got everyone to work together.”

Three of the bridges are memorials, dedicated to former Camp Host Mike Rydjord, Whale Gulch Fire Chief Archie Umina, and Briceland Fire Chief Tim Olsen. One of Joseph’s favorite parts about completing the bridge project was meeting Tim Olsen’s family at the dedication, and learning that his widow walks that trail several times a week.

The new bridges will keep the trail sound and connected, allowing visitors to traverse Sinkyone’s rugged terrain. But their function goes much deeper, helping people to connect with the unique sense of peace that this wild and beautiful park offers, knowing they are safe and supported along their way.

Joseph’s tremendous accomplishment makes him an inspiring supporter of the redwood forest.

Members of the bridge project volunteer team have continued to work together on improvement projects at Sinkyone – including two more bridges!

All photos are courtesy of the Haas family.

About Save the Redwoods League

Since 1918, Save the Redwoods League has protected and restored redwood forests and connected people with their peace and beauty so these wonders of the natural world flourish.

In the scenic redwoods country near Eureka, California, lies Headwaters Forest Reserve. You might remember Headwaters as the subject of a very contentious, very public, decade-long struggle in the 1990s to protect ancient redwoods from continued logging. When you walk among its massive, moss-draped giants, it’s easy to see why so many people fought so hard for their preservation.

What I hoped to gain from the recent Cultural Relevancy and Inclusion in Outdoor Organizations convening was a sense of togetherness on a topic that very few outdoor organizations and foundations are addressing in action. It is a complicated topic to wrap one’s brain around in reaching an action plan, I get it, but what is at stake is a country that will be majority people of color in 20 years, and if people of color are not developing relationships with the land now, we certainly won’t care about saving the redwoods or protecting endangered species as we grow into a majority status.