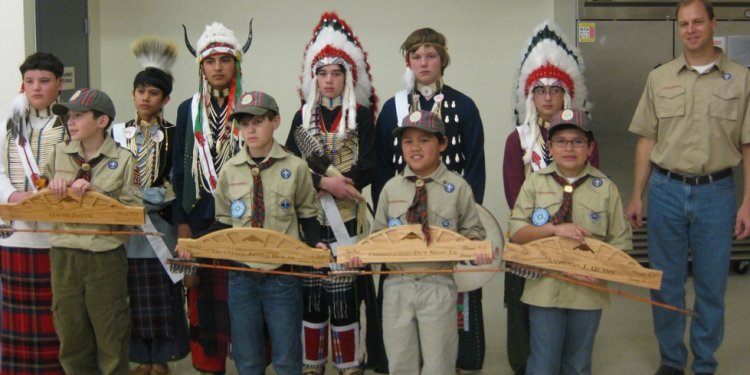 The Scout uniform stands for the brotherhood of Scouting, for the Scout ideals, and for outdoor life. It shows that the Scout belongs to the biggest boys organization in the world. We wear the uniform because it is a means of identifying ourselves openly with the principles to which we are committed - to build character, to foster citizenship and to develop fitness.

When joining Troop 777 there is a fee that covers the following items. These are usually presented to the boy when he transitions from Webelos to Boy Scouts.

The joining fee also covers the following items, which are presented to the Scout as follows:

Pin-on Name Badge - The name badge is specially ordered and is presented as soon as they are received. Troop 777 Beret - The beret is presented to the Scout upon attaining the "Boy Scout" rank. Campaign Hat - The coveted campaign hat (the smokey-the-bear hat) is presented to all Scouts that have completed the Buckskin Youth Leader Training Course provided by Council.

If you already have any of the above items, the joining fee will be reduced accordingly.

Upon joining, the following Scout uniform is requested two weeks after acceptance into the Troop:

Boy Scout short sleeve shirt. Boy Scout pants with zippered bottoms. Boy Scout belt. Boy Scout socks (green), any length. Dark colored hiking boots. NO TENNIS SHOES! San Gabriel Valley Council shoulder patch. World Crest of Scouting (circular purple patch with the white fleur de lis) Left Sleeve San Gabriel Valley council shoulder patch (CSP): Worn by all Scouts directly below the shoulder seam. Any San Gabriel Valley Council shoulder patch can be worn. Unit Numbers: A green "777" embroidered on tan background. Worn directly below and touching the council patch. Badge of Office: A round patch signifing the current troop position of the Scout. A troop position is usually held for six months and should only be worn while active in the position. Worn directly below the unit numbers. Trained: This "Trained" patch signifies that the Scout has attended the Troop Leader Training (TLT) and has been trained in his current position. Right Sleeve U.S. Flag: The US flag comes sewn on the uniform when purchased. Patrol Emblem: This round patch signifies the patrol that the Scout belongs to. It is worn 3/8" below the US flag. National Honor Patrol Star: This is patch that is earned by a patrol. When earned, it is worn directly below and touching the patrol patch. Journey to Excellence Award: Embroidered cloth patch worn by Scouts and leaders in troops who meet the criteria for the award. Worn centered on the sleeve 1/2" below the patrol patch. Left Pocket World Crest: The 1 1/2" diameter badge is white on a violet background. The emblem should be worn centered horizontally above the left pocket and placed vertically centered between the top shoulder seam and the top of the pocket. Service Stars: Gold metallic numbered star worn with colored background to indicate years of service in Scouting. The service stars are worn 3/8" above the pocket or any earned square knot. Tiger Scout: Orange background with a 1 year pin All other Cub Scout: Gold background with the year pin corresponding to the total number of years the scout was a Wolf, Bear, and/or Webelos Scout Boy Scout: Green background with the corresponding year pin for service in Boy Scouts Adult Leader: Light blue background with the corresponding year pin for leadership in Boy Scouts Attendance Pin: A gold-colored pin may be worn to recognize good attendance at troop meetings. It is worn centered above the pocket in line with any year pins. Boy Scout Rank: The badge of rank is worn centered on the pocket above the Arrow of Light Award. Arrow of Light: A Cub Scout earning the highest Cub Scout award, the Arrow of Light, may wear this patch on his Boy Scout uniform directly below his Boy Scout rank patch. Right Pocket Jamboree: An earned jamboree patch worn above the pin-on name badge. Name Badge: The pin-on name badge is worn directly above BSA or interpreter strip. Interpreter Strip: This is an earned patch by Scouts who meet the requirements for any language. Pocket Flap: When a Troop 777 Scout earns his Totin' Chip or Firem'n Chit card, he is presented with a special patch which he can wear on this pocket flap. A Scout who has been elected into the Order of the Arrow replaces that patch with the OA lodge patch. Pocket Patch: Any camp or high adventure patch can be worn centered on the pocket.
Source: www.magnificentsevens.org