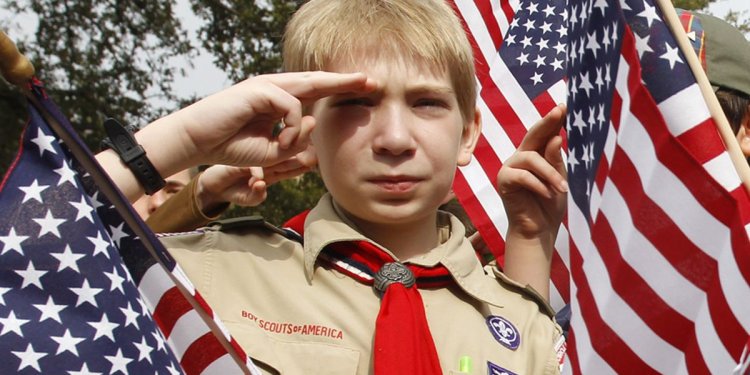 There are organizations that don't call themselves Scouts, but might be described as "Scout-like". And there are some groups that call themselves Scouts, but are very different from traditional Scouting. Many (but not all) such organizations consider themselves to be an alternative to Scouting. There is no clear line of distinction between "true" Scouting and "Scout-like" or "Scouting Alternative" programs, nor is there any worldwide agreement on what is "true" Scouting. Here are some guidelines that I use to help determine if an organization is "Scout-like" (and please email me if you can improve on these guidelines, or if you can offer additional information about any of the organizations listed below):

Many of these organizations are US-based, although some have branches around the world. Many are also church-centered Christian evangelizing groups, some belonging to specific denominations, and others available to any "bible-believing, evangelical Christian" church that wants to use the program.

These organizations pre-date Scouting, and hence were doing "Scout-like" activities before there was Scouting. German Scouting owes much to, and has much in common with, the Wandervogel movement. And Scouting founder Baden-Powell thought highly of the Boys Brigade, and counted Boys Brigade founder William Smith as a good friend.

It's interesting that in the US, those organizations that compete with the Girl Scouts of the USA typically feel that GSUSA is too liberal, and tend to be conservative and often Christian only, while those organizations that compete with the Boy Scouts of America typically feel that BSA is too conservative, and tend to be liberal and to stress their inclusivity. See further below for Christian-only programs.

These organizations generally do not publish information about their size or finances.

Camp Fire—Camp Fire is a non-denominational, inclusive, US-only program started almost immediately after the Boy Scouts in 1910 (17 March). Its official founders were Charlotte Vetter Gulick and Luther Halsey Gulick, MD. By 1910, Charlotte Gulick had developed a summer camp in Maine she named Camp WoHeLo (Wohelo is still Camp Fire's 'watchword', representing Work Health Love). At the same time in Thetford, Vermont, poet and historian William Chauncy Langdon coined the name 'Camp Fire Girls' for the girls who were participating in a historical pageant he was leading (the local Boy Scouts were also involved in the pageant). Langdon also created three ranks of achievement for the girls: Wood Gatherers, Fire Makers, and Torch Bearers. On 22 March 1911, Dr Gulick chaired a meeting "to consider ways and means of doing for the girls [nationally] what the Boy Scout movement is designed to do for boys." This meeting also selected the name Camp Fire Girls for the organization. Participants included William Langdon, Ernest Thompson Seton's first wife Grace, Dan Beard's sister Lina, and James West (BSA Chief Scout Executive). BSA's Ernest Thompson Seton, Dan Beard, and James West were all members of the Camp Fire Girls Advisory Committee formed that spring. Interestingly, West always regarded the Camp Fire Girls (and not the Girl Scouts) as the girl's equivalent of Boy Scouting.

Originally for girls only, the program has been coed since 1975, when they changed their name to Camp Fire. In 1984, the organization became Camp Fire, Inc.; in 1993, Camp Fire Boys and Girls; in 2001, Camp Fire USA, and in 2012 back to Camp Fire. Youth membership is open to anyone from age 6 weeks to 21, with emphasis on kids aged 5-16. Today, 46% of Camp Fire's youth membership is male, though male participation drops off significantly in the older age range (for example, only 10% of 2012 recipients of the Wohelo Award were male). Camp Fire's highest award was created in 1962 as the Wohelo Medallion, renamed the Wohelo Award in 1996. Their motto is "Give Service". Youth membership is something around 750, 000.

'Earth Scout' Organizations—There are several loosely organized groups that promote an earth-friendly lifestyle and use the term 'Earth Scouts':

Earth Champs—Formerly called Earth Scouts, and a subsidiary of Earth Charter US, Earth Champs are "groups of parents and kids, teachers and kids, the community and kids  all working to encourage boys and girls ages 3 and up to become responsible global citizens who know how to make a difference in their local communities and in the world." Using the Earth Charter as a guide, Earth Champs groups "learn about and act to  sustain the environment, achieve economic and social justice, create peace and nonviolence and model participatory democracy".

Kids for Earth—This subsidiary of 'United for Earth' "is an organization dedicated to learn and adopt sustainable lifestyle in modern society." They list their mission as: "To raise awareness and instill proactive approach to understanding the natural resource challenges of modern society." The 'Kids for Earth' scouting program is called 'KE Scouts', for children ages 6 through 18. Through KE Scouts, "kids participate in activities, trips, and awareness/learning sessions that foster earth-friendly ways to leading a sustainable life."

Planet Earth Scouts—This is an "all age global network guided by values/principles systems/structures geared towards our transition to a healthy sustainable future!" They state that: "Earning badges is the number one fun activity for Planet Earth Scouts. Planet Earth Scouts is about learning 'sustainable stewardship' and the 4 Pillars of the Earth Charter provide a framework to develop learning activities that will enable children and adults to learn about values and principles of sustainability. But sustainable living is also about various technologies and practices that are specifically related to food, water, shelter, and energy." "The Planet Earth Scouts family is a community of Earth Stewards who are connected through a common desire to co-create a sustainable and healthy world for future generations. Their individual and collective actions are bringing definition to the term Earth Stewardship and their efforts are weaving a tapestry of planetary healing."

The 4 Pillars of the Earth Charter are:
1. Respect & Care for the Community of Life
2. Ecological Integrity
3. Social & Economic Justice
4. Democracy & Peace