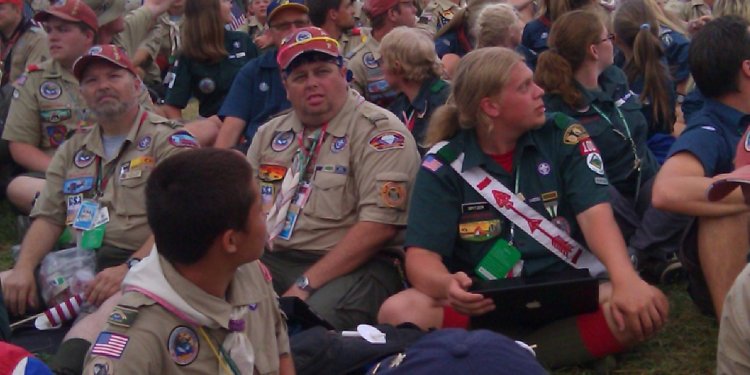 A construction crew works on the welcome center at Summit Bechtel Family National Scout Reserve in Glen Jean, W.Va. Some 40, 000 Scouts, leaders and others will descend on southern West Virginia for the first National Scout Jamboree at the site next week. Craig Cunningham / Charleston Daily Mail

In the misty woods of West Virginia, the Boy Scouts of America are building their answer to Disney World.

Known as The Summit Bechtel Family National Scout Reserve, the 10, 600-acre park opens Monday, when 30, 000 scouts are expected to visit for the quadrennial National Jamboree. The Summit will have more than five miles of zip lines, a whitewater-rafting circuit, a 120-foot tree house and a stadium for 85, 000 people.

The Summit is more than the ultimate Scout camp. It was envisioned as a way to shore up the finances of an organization burdened by a long-term drop in membership, costly sexual-abuse lawsuits and a bruising battle over whether to admit gay members. The park would bring in even more in donations than it would cost to build, Scout leaders concluded.

"The Summit gives us the opportunity to reintroduce ourselves to America and raise $1 billion for the best youth development in the world, " says a slide from a June 2010 presentation on the project.

It isn't panning out that way. Costs are rising. Initially budgeted at $176 million through 2013, the Summit's cost is now estimated to reach at least $350 million by the end of this year and $439 million by the end of 2015, according to Scouts documents reviewed by Reuters. To keep up, the Scouts issued new bonds last year - more than doubling their previous borrowing for the project.

The Scouts' efforts to pay for the Summit are off target, too. Internal financial updates show that the Scouts' national organization, based in Irving, Texas, was $108 million behind its capital-raising goal for the Summit as of the end of March.

The Summit shortfall is part of a broader financial crunch facing the Boy Scouts as the organization shrinks. That decline has been exacerbated by the protracted gay-membership battle. A compromise adopted by Scout leaders in May - allow gay youth, but not gay adults - appears to be doing little so far to ease the pressure.

Conservative troops are threatening to secede; one splinter group said last week it is forming a rival to the Scouts. Liberal troops are meanwhile establishing more-inclusive policies. Many corporate donors continue to sit on the sidelines, even as some regional Scout councils face severe deficits, according to Boy Scout executives and council members across the country.

"We cannot support an organization that has a policy that is discriminatory, " said Joanne Dwyer, a spokeswoman for CVS Caremark, which stopped all funding to local Boy Scout councils and the national organization a decade ago

The bottom line, said Doug White, who teaches nonprofit management at Columbia University, is that the Scouts "have real problems." The combination of the Summit fundraising slowdown, extra borrowing for the project and the financial impact of the gay-rights controversy "puts them in a very precarious position."

The Boy Scouts declined requests to interview chief scout executive Wayne Brock or national President Wayne Perry about the nonprofit's financing. In a statement, the Scouts denied that Summit fundraising is suffering.

"It is inaccurate to review this document and draw a conclusion that fundraising is behind schedule, " said Deron Smith, Boy Scouts spokesman. "Projections are just that, and serve as estimates that are adjusted throughout a project."

Smith said the estimated $439 million cost of the Summit was "subject to change" and "contingent upon securing donor funding." As for the May compromise on gay members, Smith said it is still too early to assess the impact on donors.

The Scouts' appeal hasn't kept pace with changing times and competing pastimes such as video games and extreme sports. There were 2.7 million Boy Scout members in 2011, down from a peak of 4.9 million in 1972. The U.S. population grew 49 percent in that time.

To help stem the decline, the Boy Scouts National Council launched a plan for a bold investment in 2009: The Summit. The brainchild of former chief scout executive Robert Mazzuca and other board members, the Summit was seen as a means to help resuscitate the ailing 103-year-old nonprofit, according to internal marketing documents.

Some board members considered the project a potential white elephant, according to two people familiar with the matter. Rising spending soon became a concern for some.

By 2015, cumulative spending is projected to reach $439 million, according to internal records seen by Reuters. That is more than the organization's $274 million endowment.

Spokesman Smith said the Summit's cost expanded as the Scouts secured donations and determined it was "wise to increase the investment in the infrastructure of the property." He declined to elaborate.

Mazzuca, chief executive when the Summit was launched, declined to talk for this article.

Last year, the Scouts drew up a plan to address rising Summit spending. A February 2012 internal memo from President Perry advised senior Boy Scout executives that available cash from donations would be insufficient to cover the "cash burn" rate for the Summit.

Perry, a former telecom executive and a part-owner of the Seattle Mariners baseball team, declined to comment.

To cover construction costs, the memo shows, the Scouts last year more than doubled their borrowings for the project.

They did this mainly by a form of tax-exempt municipal bond known as a "conduit, " in which an organization essentially borrows the name of a local government to raise cheap long-term financing.

The bonds were issued in the name of Fayette County, W. Va., where the Summit is located. The county received a $100, 000 fee to issue the bonds on behalf of the Scouts, but is not responsible for payments, according to bond documents and the Scouts' 2012 annual report.