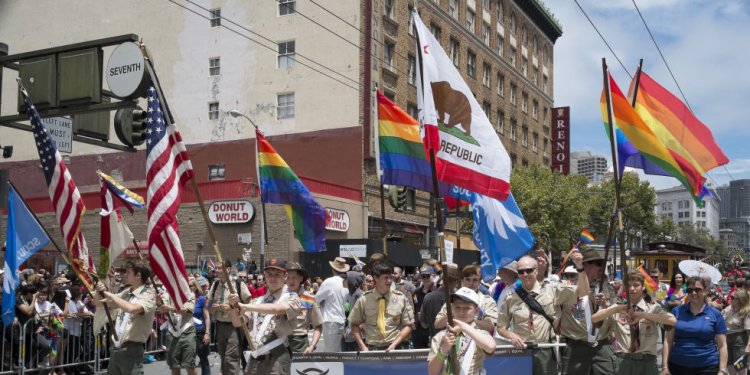 The president of the Boy Scouts of America urged it Thursday to accept gay Scout leaders.

Robert Gates said the Boy Scouts must keep up with the times or face "the end of us as a national movement."

Two years ago, the Boy Scouts decided to allow gay youths to be Scouts. But it kept its long-standing ban on gay leaders.

Gates is the former U.S. defense secretary who was elected president of the Scouts last year. He warned a national meeting in Atlanta, Georgia, that the ban on gay Scout leaders would lead to challenges in court unless it was changed. He said the ban on gay leaders could end the existence of the century-old organization.

"We must deal with the world as it is, not as we might wish it would be, " said Gates. When he was the head of the Department of Defense, he oversaw the end of the military's ban on gay men and lesbians. At the time, gay and lesbian soldiers were by law not allowed to serve in the military.

Gates' remarks come at an important time for the Scouts. The organization has come under increasing pressure to change its policy toward gay adults. Gay rights advocates said Gates' comments sent a strong signal that the Boy Scouts would permit gay leaders soon, perhaps within the year.

The Boy Scouts have maintained the ban over the years, even as homosexuality and same-sex marriage have increasingly been accepted by the American public. The policy has remained in place in part because of the strong influence of religious groups on Scouting. Many religious groups and churches believe that homosexuality is forbidden by the Bible. About 70 percent of Boy Scouts belong to troops sponsored by Mormon, Catholic or other churches.

On Thursday, a federal judge ordered local officials in Alabama to start issuing marriage licenses to same-sex couples. Gay weddings were to have begun there earlier this year. They were stopped by the state's Supreme Court, which is known for being conservative and against gay marriage. Next month, the U.S. Supreme Court is expected to decide whether the Constitution guarantees same-sex couples the right to marry.

In his speech, Gates said organizations that sponsor Scout troops should decide whether to hire gay leaders. His solution would satisfy people that would like to see the gay ban lifted. At the same time, it would let religious groups reject gay leaders.

The Boy Scouts may be sued by gay leaders who had been fired or denied a job.

In New York, Pascal Tessier is an openly gay Eagle Scout who was hired by the state chapter even though the Boy Scouts' national policy doesn't allow it. He has hired a law firm to represent him if he is fired because he is gay. The powerful New York law firm helped reverse California's ban on same-sex marriage.

The firm has also filed a court complaint against the Denver Boy Scouts. It is representing a woman whose job offer with the Scouts was withdrawn after she said she was gay. There are others like her in Ohio, Oklahoma and elsewhere, said Josh Schiller, a partner in the firm.

Laws Are Changing Too

In the past, the Scouts have been sued in court, but refused to change its policy on gay leaders. Recently, many states and towns have passed laws banning discrimination against gays. These laws would help force the Scouts to allow gay leaders, Schiller said.

People within the Boy Scouts also oppose the ban on gay leaders. Nationally, 20 regional councils have passed a rule protecting gays in scouting, said Zach Wahls. He is an Eagle Scout and the executive director of Scouts for Equality. The group was started to promote gay rights within the Boy Scouts.

The fact that the Scouts appear about to lift the ban suggests that they are worried about "a full-scale rebellion" if they don't act, Wahls said. "They've realized this isn't a fight they want to have in 2015."

In his remarks Thursday, Gates said that the Boy Scouts would not punish local councils that have hired gay leaders. He warned "plainly and bluntly" about the serious problems if it did not change.