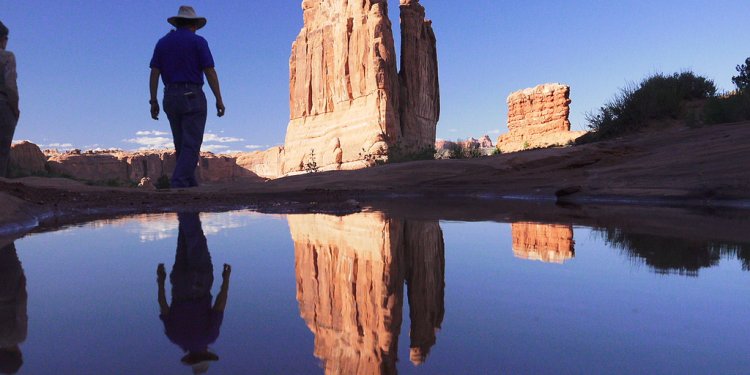 John Angus at the age of 12 attended the jamboree from Las Vegas, Nevada. The jamboree was from July 17-23, 1953. Below are interesting articles that were saved by family members.


In 1953, the National Scout Jamboree was held on Irvine Ranch land in the area of what is now Fashion Island Shopping Center. (Image courtesy of Irvine Company)

Not the brisk military cadence but with purpose and reverence, Boy Scouts by the thousands walked a winding, hilly road Sunday to worship their God. Jamboree City, Calif. The post office may not even list the newest western boom town, but in a few days it will have a population of almost 50, 000.

Not long ago, sheep grazed on its 3, 000 acres. but today it's a bustling little tent city, putting finishing touches on a man sized invasion by young America.

From every state they will come - a pummeling, laughing outpouring of Boy Scouts. For a week, the quit of vast, historic Irvine ranch will be shattered by shouts and songs, clatter and tampering feet.

This peaceful rolling land overlooking the Pacific ocean, is the site for the third national Boy Scout jamboree. Scout leaders are working day and night to be ready for J day. The jamboree officially opens July 17 but the scouts will start pouring in by train, auto and bus by July 13.

Visualize, if you can, the amount of food, water, refrigeration, sanitation, bandages and everything else needed for 50, 000 growing boys. Then you get the magnitude of the job.

A big chunk of the raw land with southern California brown grass covering rolling hills has been turned into a model camp site. Roads have been built, water popes laid, electric and telephone lines strung. As of now, the hills are marked with a scattering of service tents, shower facilities and huge navy refrigerators.7nbsp; When they boys arrive and set up their camps there will be a forest of 30, 000 multicolored, varishaped tents.

Jamboree city is on the coast of highway, U.S. 101, about 40 miles southeast of Los Angeles on the way to San Diego. The land of the Irvine ranch rolls down to the seaside resort of town of Newport Beach where quite a few southern California millionaires tie up their yachts. Newport Beach, with its population of 12, 000 sprawls along the beach for about eight miles. Nearest large city is 50, 000 plus Santa Ana, five miles inland.

It is a colorful place. From the jamboree acres you can view the dark blue ocean, the yachts in Newport harbor and the white houses of the town. The beach is within easy hiking distance.

The scout camp has been divided into 36 large sections - each to accommodate 34 troops. Each troop will have four patrols of eight scouts each, a senior patrol leader, scribe, quartermaster, two assistant scoutmasters and a scoutmaster.

Each section will be a self-sustaining village, with a health lodge, headquarters, commissary, equipment tents, post office and shower facilities, In all there will be 1, 248 troop campsites, each 90 by 90 feet. It sounds quite civilized, but the boys will be sleeping in tents on the ground - in sleeping bags and with ground cover - and they'll be cooking their own means, issued by the commissaries, on open charcoal fires.

The scout organization has been issued some fantastic figures dealing with the appetites of 50, 000 boys. Every meal for every day already ha been planned. For instance, for supper July 18 every scout patrol in some 5, 000 outdoor kitchens will be cooking fried chicken, sweet potatoes and string beans. this menu also includes cranberry sauce, celery, tolls, butter, canned pears, cookies and milk.

Mountains of Food Some scout leader with a flair for figuring has reported that on the morning when the boys get pancakes they would form a stack, if stacked, higher than the Empire Stat building. Here is a sample of quantities that will be used in one week:

The 100 tons of mean breads down this way:

The boys won't have to wash dishes, because paper ones - eight million pieces of paper goods - will be furnished.

Jamboree City, Calif. The army of Boy Scouts on this southern California ranch was a little sleepy Saturday morning - the second day of their national jamboree - after a stirring pageant from the pages of American history Friday night.

From the hills and canyons of the 3, 000 acre Irvine ranch, the scouts and leaders massed in an outdoor arena to hear a recorded message from President Eisenhower and sit enthralled by the colorful extravaganza.

the president's message told how he learned "the meaning of brotherhood and the spirit of united helpfulness" when he attended the 1950 jamboree at Valley Forge, Pa.

"bonds of common purpose and common ideals can unite people, even when they come from most distance and diverse places. This is an important lesson, and even if you learn no other, you will leave Irvine ranch with a new wisdom, " the message said.