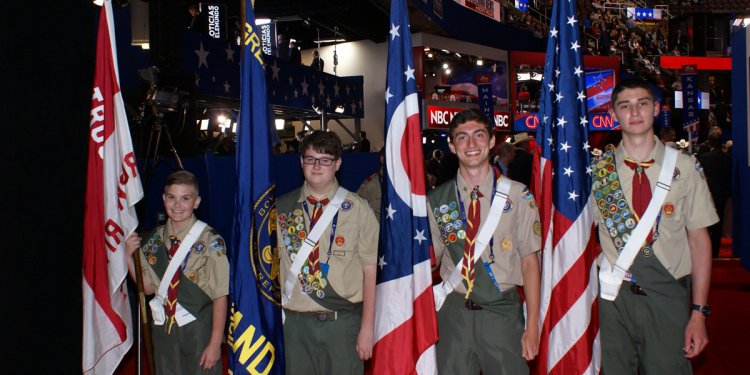 Rep. Dana Rohrabacher knows exactly which lesson from his time in the Boy Scouts has helped most in Washington: handling poisonous snakes.

"That skill has really served me well here on Capitol Hill, " the California Republican joked.

In all seriousness, Rohrabacher and other Eagle Scouts in Congress say their boyhood experience was good preparation for a career in politics.

"Both take ambition, both take a quiet determination, " Sen. Sherrod Brown (D-Ohio) said. "Both have their moments of loneliness because you need to lead and be apart from the crowd and achieve."

Like winning a seat in Congress, earning the rank of Eagle Scout is a difficult task. A Boy Scout must earn at least 21 merit badges, serve at least six months in a troop leadership position and manage a community-oriented service project — all before age 18. About 5 percent of Scouts achieve the rank.

But Scouts are overrepresented in Congress. Although only 1 percent of U.S. men are Eagle Scouts, more than 6 percent of the 444 men in the 112th Congress earned the rank, including 12 Senators.

The Congressional Eagles speak fondly of long-ago camping trips, late-night meetings and hiking excursions. Most, if not all, can still recite the Scout Oath and Scout Law verbatim.

"I live my life, in essence, according to Scout Oath and law, " Rep. Robert Dold (R-Ill.) said, before reciting the oath. "Making sure you stay grounded in it is enormously helpful. Make sure you keep that compass. That's one of the things that will never leave me."

But Members say they also learned valuable political skills on their trail to Eagle Scout.

"It gives you a well-rounded background in fundamental challenges that you encounter growing up, but that serve you well at the same time in whatever career you might pursue, " Sen. Thad Cochran (R-Miss.) said.

The skills you learn as an Eagle Scout "are pretty fundamental to doing the work that we do as elected officials or as candidates, " Rep. Russ Carnahan (D-Mo.) said. "They were very good early lessons on some really basic skills that come in handy today."

Lesson No. 1: Be Prepared

Nowadays, Cochran comes to the Senate floor prepared for debate — but he wasn't always that way. The first time he took an oral exam for a first-aid merit badge, the Senator realized he wasn't prepared enough. He turned red with embarrassment because he couldn't answer the questions.

"Gosh, the least I could have done was to prepare better and be sure I knew the material so I wouldn't have to impose on the doctor's time, " Cochran said. "The next time I passed the test and I got my merit badge."

His colleagues agreed that preparation was essential to both Scouting and lawmaking.

"Be prepared is a pretty good model for a politician as well as a Boy Scout, " Sen. Lamar Alexander (R-Tenn.) said.

"To do your best in Congress, you need to be prepared. To be successful, you need to fulfill that Scout slogan to do a good turn daily, to do good works and to help other people, " Thompson said.

Lesson No. 2: Love the Outdoors

Alexander literally used the skills he learned as an Eagle Scout to get elected.

He didn't rely on the project planning or leadership skills he learned as a kid. Instead, wilderness survival helped him become governor of Tennessee.

In 1974, after he lost the gubernatorial race, his campaign advisers gave him some tough advice. "They said, 'Well, if you run around the state like you did in 1974, you won't win, '" Alexander said. "'What do you really like?'"

He told them he loved to hike. So in January of that year, he set off to hike across his state, meeting locals along the way.

"I walked for a thousand miles — and I got elected governor, " he said.

Lesson No. 3: Get Comfortable Speaking Up

From a young age, Boy Scouts stand up in front of their troops and sometimes groups of their families to lead songs, perform skits and give speeches. That practice helped Sen. Jeff Merkley (D-Ore.) get comfortable speaking in public, a skill he relies on heavily today.

"A fair number of folks in politics are extroverts; I'm an introvert, " he said. "The fact that you got accustomed to that standing up was useful."

Lesson No. 4: Expand Your Interests

With 21 merit badges required to reach the rank of Eagle, Boy Scouts must learn how to perform all sorts of tasks including first aid, personal management and lifesaving.

In the same way, a Member of Congress must learn a great deal about the committees on which he sits — some of which are more fun or satisfying than others.

For Rep. Steve Stivers (R-Ohio), the parallel is even more direct.

Merit badges are "in a lot of ways similar to the committees you serve on in Congress, " he said. "One of the merit badges I got really interested in was emergency preparedness, and I've been in the National Guard and dealt with that subject for the last 25 years."

Lesson No. 5: Respect Your Troop

A Boy Scout troop is close-knit. Years of hiking together and sharing tents forms close friendships, teaching boys how to get along with one another.

Although they're not wearing the same gear, the men and women of the Senate operate in similarly close quarters. Alexander drew a parallel between his old Boy Scout troop and his new one.

"The Senate is all about relationships, " Alexander said. "We begin the day in the gym, go to prayer breakfast and end the day at a fundraiser together. Being in a patrol is pretty good training for being in a body of men and women that operates by unanimous consent."