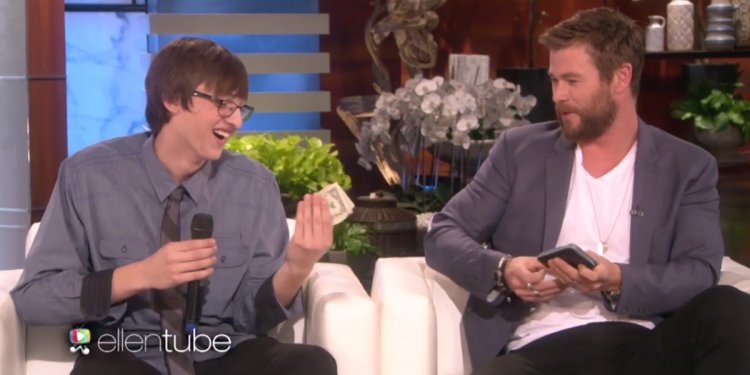 Scouts help anyone in need — even superheroes.

Illinois Eagle Scout Tristin Budzyn-Barker found a lost wallet while on a recent trip to California. Inside, he learned the owner’s not-so-secret identity: actor Chris Hemsworth.

“Mom, do you know who this is?” Tristin remembers saying. “We found Thor’s wallet.”

Tristin did some investigating, found the actor’s address and sent a letter telling him about his find. To Hemsworth’s surprise, the wallet was returned with all the cash still inside.

This good turn got the attention of another famous person: Ellen DeGeneres.

As a reward, Hemsworth gave Tristin all the money that had been inside the wallet — plus a little extra. And then he gave the Eagle Scout a gift money can’t buy.

Tristin, a member of Troop 141 of the Blackhawk Area Council, earned Eagle in November 2015. He discussed his Eagle Scout service project with DeGeneres on her show.

“What’s really cool, to earn the Eagle Scout badge … you were building shelters for horses, ” she said. She showed photos of the finished project.

As a final surprise, DeGeneres gave Tristin his own wallet and $10, 000 in cash from Shutterfly.

All that from one good turn.

“You’re an amazing young man, ” DeGeneres said. “Thank you for being such an honest guy.”

Thanks to Jillian Infusino and Ann P. for the story tip.

Correction: The original version of this story said Tristin is a Life Scout. He has earned the Eagle Scout award.